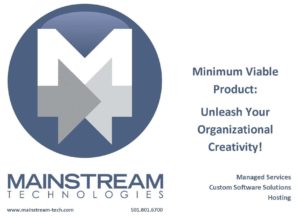 Have you ever had any of these business challenges?

If you’re operating an SMB or managing a department within a larger organization, having the ability to experiment or have your own R & D group is not as farfetched as it once was.  If you believe that ideas and innovation offer the potential to unlock new opportunities, then you might want to consider putting together a structure and team that can take a good idea and bring it to reality.

Some firms encourage innovation or new ideas by dedicating funds for research and development projects that originate from the business stakeholders.    Since these funds are limited, many use the minimum viable product (MVP) approach to get the most for their money.  This gives them the opportunity to test out a new idea to see if it’s viable before too much time and/or money is spent.  Insiders are fond of saying that the minimum viable product approach gives you the ability to fail faster than with other options.

MVP is central to the iterative development process.  It’s used to flesh out new ideas, prototype features, and gather feedback to direct future efforts while focusing energy on only the essentials.   Practically speaking it’s a lease to own approach to see if an idea is worth the additional investment of ownership.

An MVP is a form of prototyping that is often less costly than developing a more finished solution (with more features) and it minimizes the investment if the product fails to win approval to proceed to the next round.

An MVP has just the essential core features needed to make it useful and generate user feedback. It’s typically released to a limited number of users who’re considered early adopters with the ability to envision what the possibilities could be if the MVP was fully developed.  This approach provides the flexibility to test out an idea while limiting the financial exposure until it’s determined the idea warrants further development.

User feedback is critical for deciding whether development should; proceed in the same direction, change course, or if it continues, which features should be developed next and in what order.

If you believe innovation can unlock new opportunities for your organization, the MVP approach is a way to cultivate it in a manageable way that both encourages innovation and limits the risk.