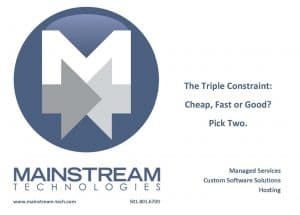 In our pursuit of creating excellent software to operate our business, we’re often faced with the triple constraint. We can either choose to minimize cost, or get something in production quickly or we can take our time to get a good project delivered.  The triple constraint: cheap, fast or good? We can pick any two of the three but we can’t have them all.

In software development, the hourly rate is generally used as a key differentiator in selecting a provider because is it’s mistakenly assumed that all software developers are created equal.

Mainstream is a destination employer of experienced software professionals.   Our staff averages 15 years’ experience in their craft with 7 of those being with Mainstream.   One of our primary 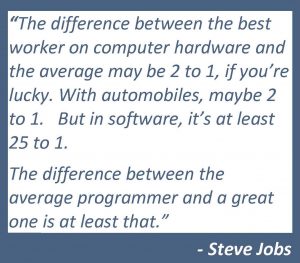 areas of focus is acquiring top talent, cultivating it and unleashing it for our clients.   Our ability to deliver and positively impact the FINAL COST of the SOLUTION has been validated by our successful 24+ year track record.

The reality is that rate is a good indicator of supply and demand and little else.  An average rate can be translated to mean ‘average’ skills and experience.

The following case study is based on the experience of a Mainstream client.  They were savvy enough to track the entire effort and the associated costs of building a custom software package.  As a result, there is verifiable data to substantiate Mr. Jobs’ claims that the quality of people working for you does impact your business.

Client A found themselves in a struggle to deliver a new software solution to a key stakeholder in a timely manner.

Originally when tasked with the project, they were at full capacity managing day to day activities and chose to meet their obligation by using a contractor.  They reached out to their source, reviewed the options, identified the most competitive rate and chose a candidate to work alongside an internal resource who had been assigned to the project.

After 3 months they had only completed 10% of the functionality.  At this point, the lack of progress alarmed management because there was a risk of failing to meet their deadline.     Realizing they were at risk, they reached out to Mainstream Technologies for help.

Mainstream was given the leeway to assign two FTE (full-time equivalent) resources, yet the project required a blend of 3 distinct skill sets rather than two.

Mainstream’s LEAN SOURCING™ service offered our client the flexibility to utilize resources on a fractional basis.   This allowed them to dynamically deploy the right resources when needed, for only as long as they were needed and no more.   Partnering with Mainstream gave the client access to a technology team rather than a static set of developers.

Once the agreement was completed, Mainstream redesigned the solution from the initial effort and completed the project in 3 weeks.  Having delivered the original requirements well in advance of the due date, the client chose to proceed with Phase 2 feature enhancements.

Beyond meeting the original obligations well in advance of the deadline, the client had indisputable evidence that a provider’s hourly rate wasn’t a meaningful indicator of the FINAL COST OF THE SOLUTION.

In this example, Mainstream’s rate was higher than the competition, but the FINAL COST OF THE SOLUTION was 38% of what had been spent on the initial effort.

The triple constraint is an immutable fact.  But there are any number of factors that contribute to the FINAL COST OF THE SOLUTION.  An hourly rate is only one factor, and if you believe Steve Jobs, you realize you will get what you pay for.  The quality of the people you surround yourself with does make a difference.

If you would like more information about how Mainstream Technologies can help you get the most from your technology investment, visit our website at www.mainstream-tech.com or give us a call at 501-801-6700.